Video is crucial to the success of online business. This is something that we all know. The statistics back up the idea of the importance of video. Social media is the perfect place to feature your explainer videos. More people will be able to see and share your message by placing your ads on social media and urging people to share. In this post, we will look at 7 examples of how to best use video on social media.

Importance of Video in Marketing on social media

Some of the advantages of social media platforms for marketing include the following.

In this post, we will highlight seven companies that seem to have it right about how to use video on social media to maximize their impact with video.

Zappos, a company that was recently purchased by Amazon, knows how to capitalize on the potential of video by using social media to promote it. They have a large graphic on their Facebook page that says, “Let’s have an LIKE-LIKE relationship,” then there is another phrase at the bottom of the graphic that says, “Gain access to exclusive content.”

This technique of inviting customers to like their page by offering exclusive access to content encourages loyal Zappos customers to like their page. This allows Zappos to post updates that these people will see whenever they have anything new to share. They also added an option to sign up for their email list which allows them to market to them even further. They also feature company videos on Facebook and social media which focus on the company’s philosophy and business news.

Zappos knows, as many successful brands do that combining the best of two powerful strategies (video and social media) is the key to gaining the intention of your targeted audience that will lead to more conversions and brand evangelists.

Check out one of their latest video tweets here. 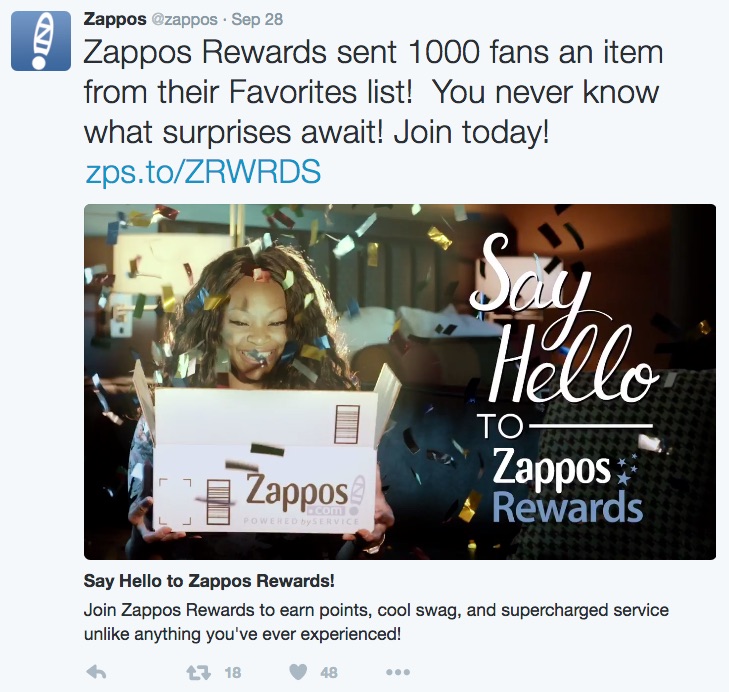 Believe it or not, the old famous Oreo cookie of our childhood is staying alive and well via social media using videos they created for Twitter. In this clip, you’ll see one of the horror movies they are spoofing, “The Shining,” by showing a lone Oreo standing in the hallway of a hotel while a flood of milk flows into the hallway to engulf the cookie.

The video is hilarious, but it also makes the point that anything can be accomplished with video. Imagining a chocolate cookie that is likely to be drowned by the milk, also has a suggestive effect of making you want to go out to the store and purchasing a bag of Oreo cookies, even if you have not thought of them in years. 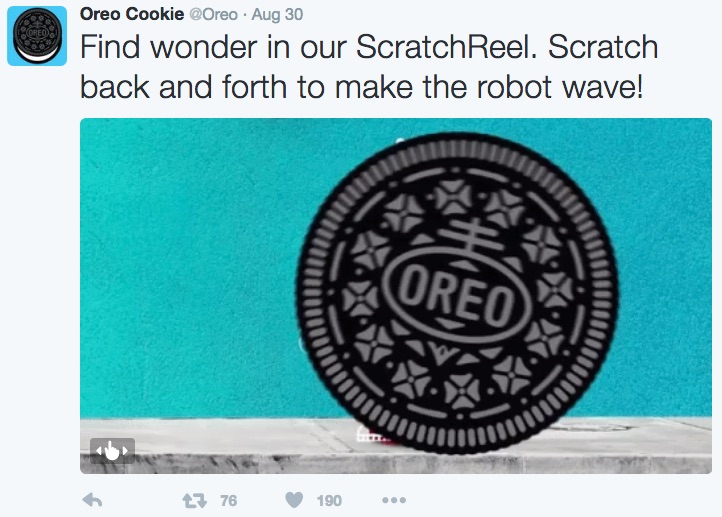 Netflix, king of on-demand video programming, features a short video on Twitter of Alicia Silverstone lying on the bed with her boyfriend trying to get his attention but she can’t, because he is watching Netflix.

This short but effective clip communicates that Netflix has such engaging programming now that even Alicia Silverstone can’t draw your attention away. The clip is also entertaining and humorous as Alicia falls off the bed in the process of flipping her hair away from her face and trying to entice her boyfriend. 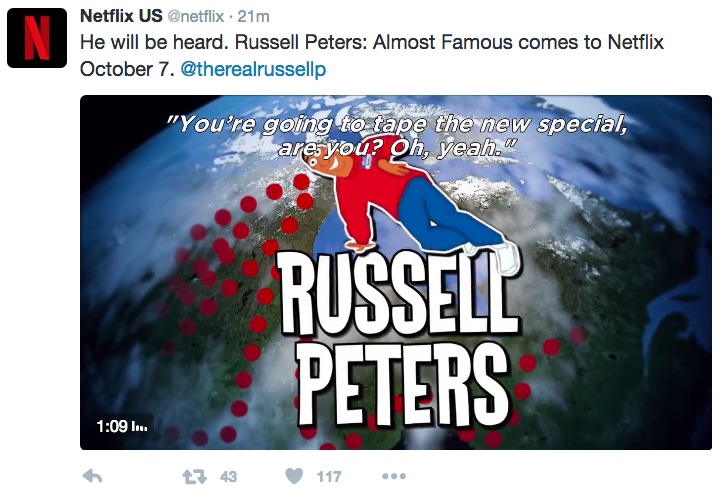 GoPro is known for producing sports cameras that cater to daredevil-type camera shots that are hard to get with normal cameras. Their video on Twitter emphasizes this well by getting even more hard-to-get shots that they took with the GoPro.

The video features people in precarious but fun situations such as in a canoe or mountain top, which appeals to people who tend to buy the GoPro cameras and it proves that GoPro can go anywhere because they filmed it with the GoPro!

Apartments.com focuses on helping people make the move to another location with ease, using their apartment locator service online. They emphasize this point in this evocative video that features Jeff Goldblum on a grand piano playing music as he rises to the top of a high-rise apartment in the sky.

Apartments.com features several of the Goldblum videos on their Facebook page as well as other ad campaigns that they have done in the past. By clicking on “Watch video,” you can take a look at them all, but Goldblum’s ads are the ones they are flaunting the most. You can’t blame them. He’s one of the most influential celebrities out there and a great one to do a testimonial for their brand.

We’ve all seen the commercials for Apartments.com on television, and their famous spokesperson. You can see an example of how they are using these same video ads on Twitter here. 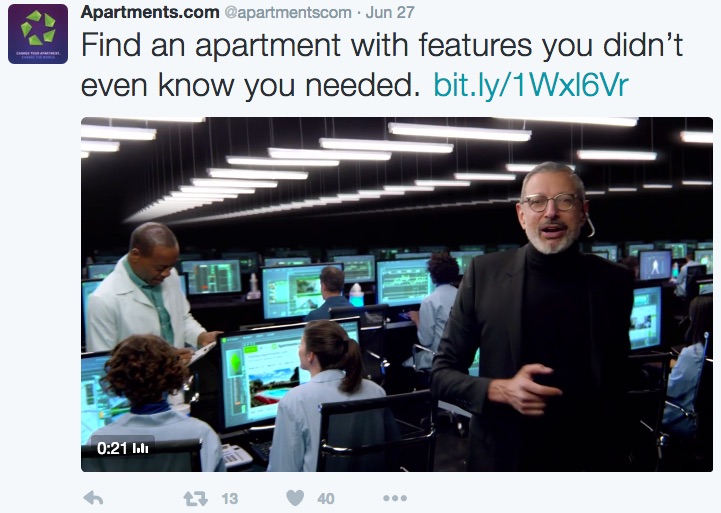 This outstanding five-minute YouTube video which chronicles the history of this original beer company, features a dynamic soundtrack with music and background effects that portrays their brand as both traditional and “down home.” They also show the process of their beer-making process, and they feature a walk-through tour of how they produce their award-winning beer, coupled with inserts of great twangy country music in-between.

This almost “reality-TV” approach to their explainer video goes a long way toward increasing interest in their brand by focusing on what the brand does on a day-to-day basis. It creates a type of transparency about their brand that is bound to increase their level of credibility and trustworthiness, as well.

Tasty is a food site that offers some of the tastiest recipes online and shows you how to make them in quick one minute or fewer video segments. YouTube features many of their videos that they have done in the past. The brand reports that over half (50%) of its revenue was created using video on social media. Their video views on Facebook alone were over 1.8 billion in August 2016. 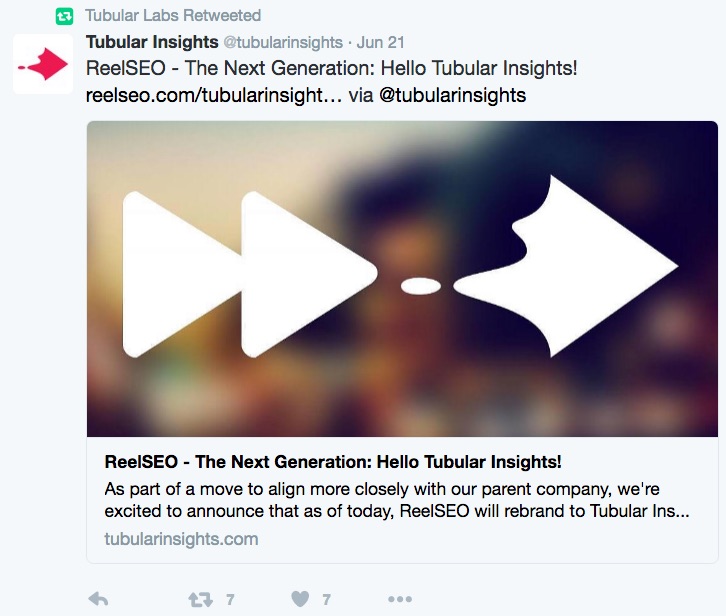 Now for some video marketing tips

These seven video social marketing gurus are not the only ones making a scene using video on social media. But they are certainly creating a lot of buzz about their brand using this highly effective medium. There’s no doubt that video works on social media.

The only thing you need to remember is that the format and size of your video should be optimized for social media. Facebook has different specs for video than Twitter does. Instagram has another format as well, all of which you need to know for your video to be displayed correctly on social media.

Don’t think you have what it takes?

You, too, can leverage the power of video by creating a great video that gets attention on social media. All it takes is a great idea, a storyline or angle that you want to focus on, and the equipment and resources to put it all together.

How We Can Help

At AnimatedVideo.com, that’s what we do and we love it. We work with companies side-by-side to learn about their brand so that we can design a strategy that will capture your brand in the best light.

It’s important to optimize your video for social media too. There are millions of viewers on mobile devices who want to see your content on social media and share your message. Don’t leave money on the table by forgetting this important group.

Check out our portfolio online and ask us about animated videos as well as whiteboard videos that we can create for your brand so that you can compete with big brands and win!