If you are looking for some ideas on what makes a YouTube channel popular,here are the top 10 most subscribed YouTubers. Keep in mind that viral does not equal best quality, though. And enjoy the journey! Some of these may surprise you.

1. PewDiePie– As of this writing this channel has over 47 million subscribers. It focuses on the video games genre and is owned by Maker Studios. They feature lots of material (some funny, some serious) on the topic of video game play and show strategies to win some of the most popular games. The channel seems to appeal to the younger audience who likes lots of screams, laughs, and slap-stick comedy and is not meant to be taken too seriously. But a lot of people do. With over 47 million regular viewers, they are at the top of the most subscribed to list on YouTube. 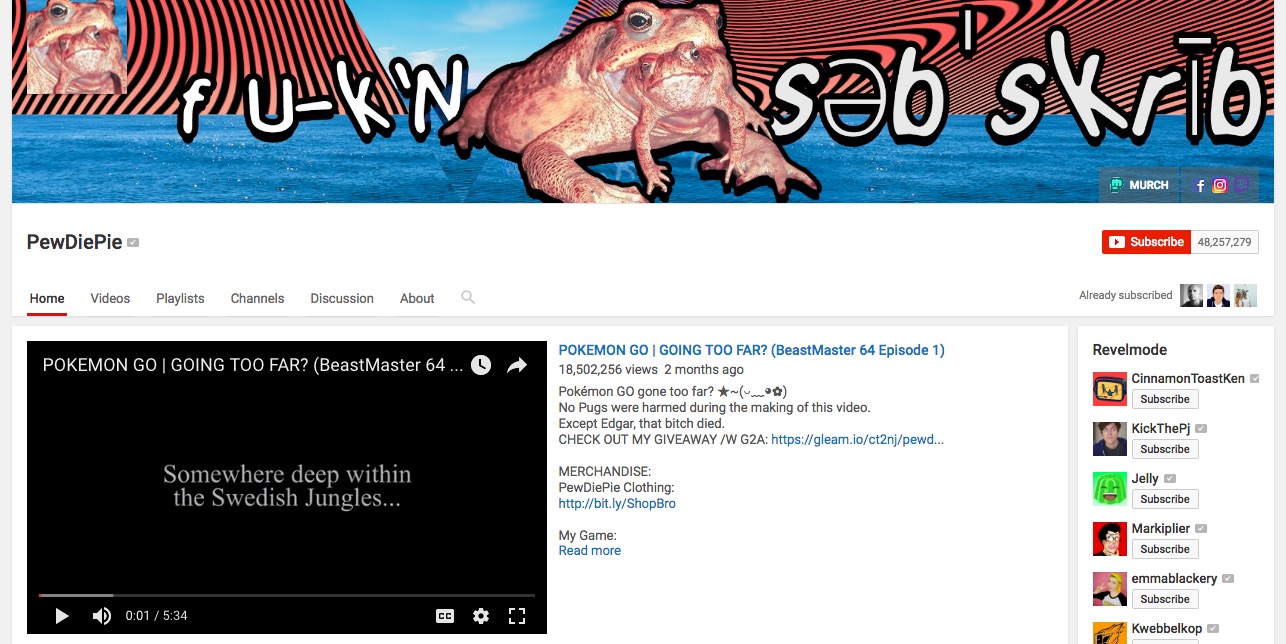 2. HolaSoyGerman– This channel has 29 million subscribers so they are not too far behind PewDie Pie. What kind of content do they feature? It is a video log (Vlog) that features the travels and antics of Los Hermanos, a Hispanic-speaking entertainer who seems to have a gift with standup comedy and commentary. His presentation style is highly energetic and he has a continual dialogue that tends to make one wonder where he gets all of his energy. His channel takes a fun and tongue-in-cheek approach which probably is partly what keeps people coming back for more. The channel is only available in Spanish, however. 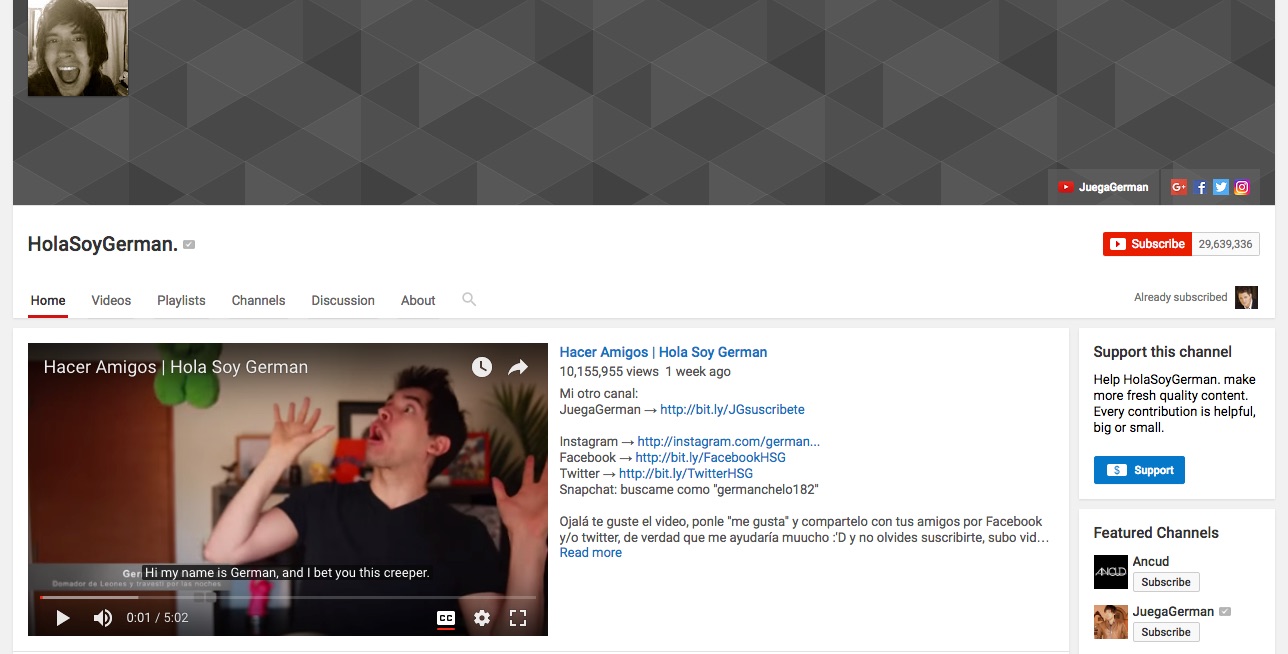 3. Justin Bieber Vevo– This is the official YouTube channel of famous musician and performer, Justin Bieber. It has over 24 million subscribers and features the latest music of Justin Bieber, as well as many of his archived hits. 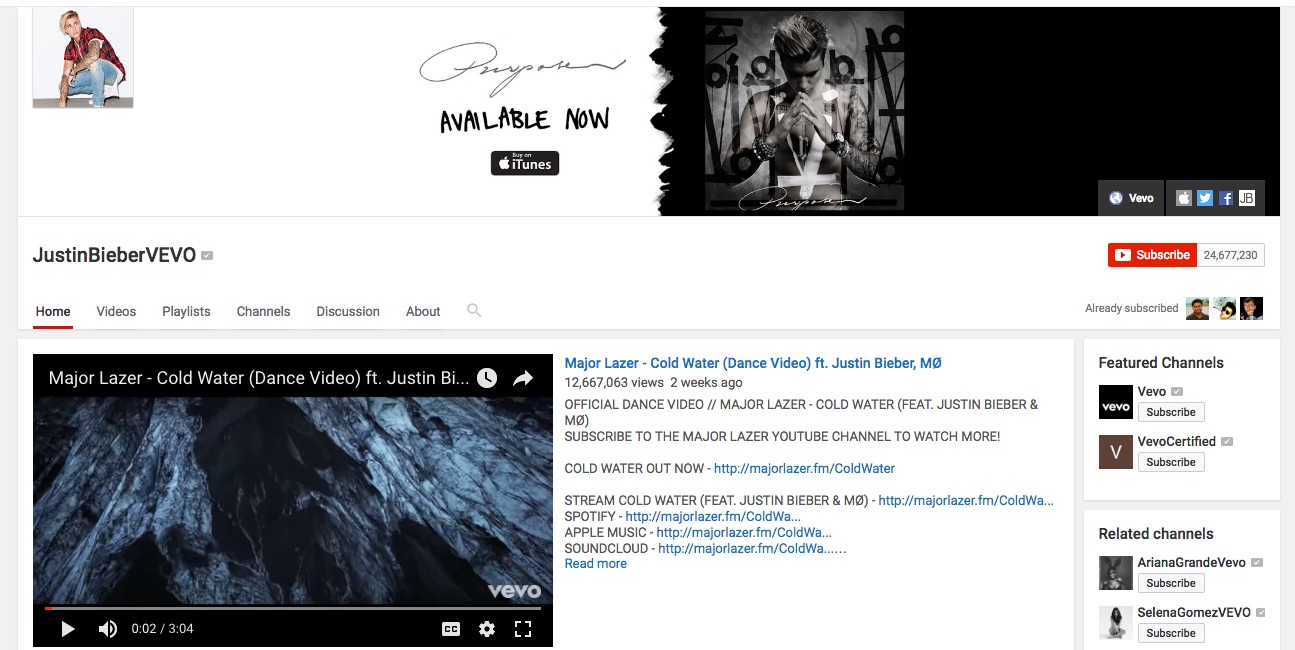 4. YouTube Spotlight– YouTube Spotlight is a channel that features some of the best of YouTube. On the front page of this channel is a video featuring Julius Yego, Javelin champion, who claims he learned how to succeed in the sport by watching YouTube videos.

This channel features quite a few better videos than anything we’ve seen so far in our research for this post and has significantly more substantial content than the top 3.
The YouTube Spotlight channel has over 24 million subscribers. 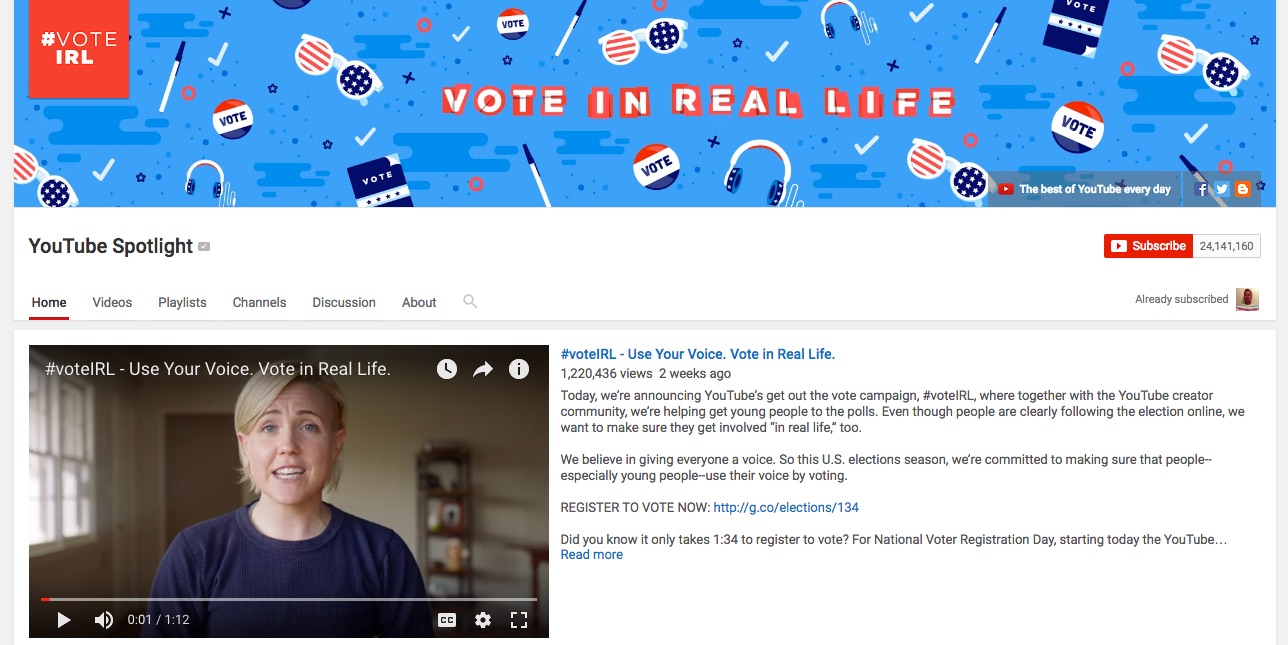 5. Rihanna Vevo– Rihanna Vevo is the official channel of Rihanna, the black American artist who has excelled to fame recently with her soft, relaxed voice and soulful love songs. Her songs such as “I Want You to Stay,” resonate with people in a very personal way and all of her songs seem to tell a story of bittersweet love.

Rihanna’s channel has received almost 23 million views and has 22 million subscribers, which means that almost everyone who viewed one of her videos became a subscriber.

This alone, is an amazing feat. For an artist or brand to capture repeat visitors at such a high rate of return as this indicates that she has something that people want to see again and again and she must have something about her performance or videos that people crave and want to have in their favorites.

Watching her performance on YouTube, we can understand why. She is an attractive, energetic performer who sings from the heart. But she doesn’t feel compelled to use off-the-wall tactics or dance all over the stage to draw attention. 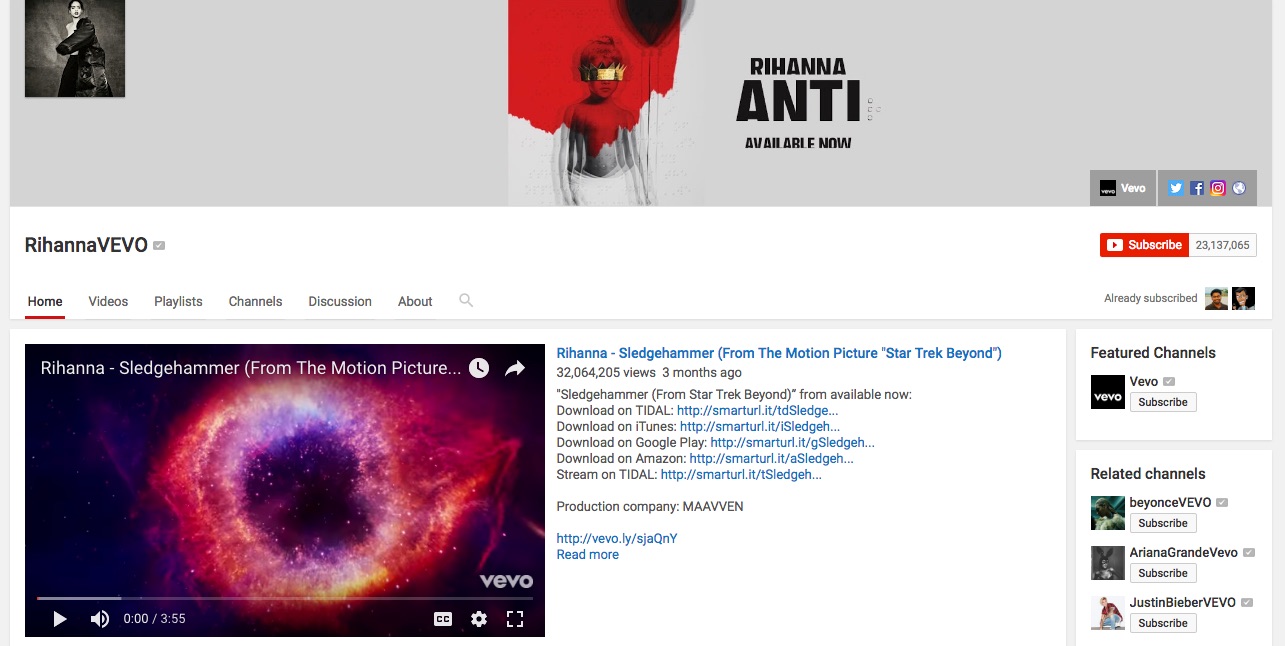 6. Smosh– Smosh is a farce of highschools everywhere and one of their main skits is “Highschools Everywhere,” in case we didn’t get the point otherwise. They do have other situation sketch comedy routines but they seem to focus on the highschool environment. They create extremely absurd situations and dialogue within the “classrooms” and always portray teachers are demeaning and unattractive.

I was particularly drawn to the conversation that one of the “jocks” has with a studious girl in the hall over the book, “Catcher in the Rye,” in which they discover that that is the one thing they have in common.

To put such a serious novel with such strong social and political meaning in the middle of absurd youth comedy illustrates that there is some hope for our characters that, once they work their way through sometimes unpredictable and awkward adolescent, that they will somehow find their way in the world and do something worthwhile.

This strange “do it as we go” ongoing TV web drama has had over 22 million views and 24 million subscribers and stands uniquely as one of the most viewed YouTube video. 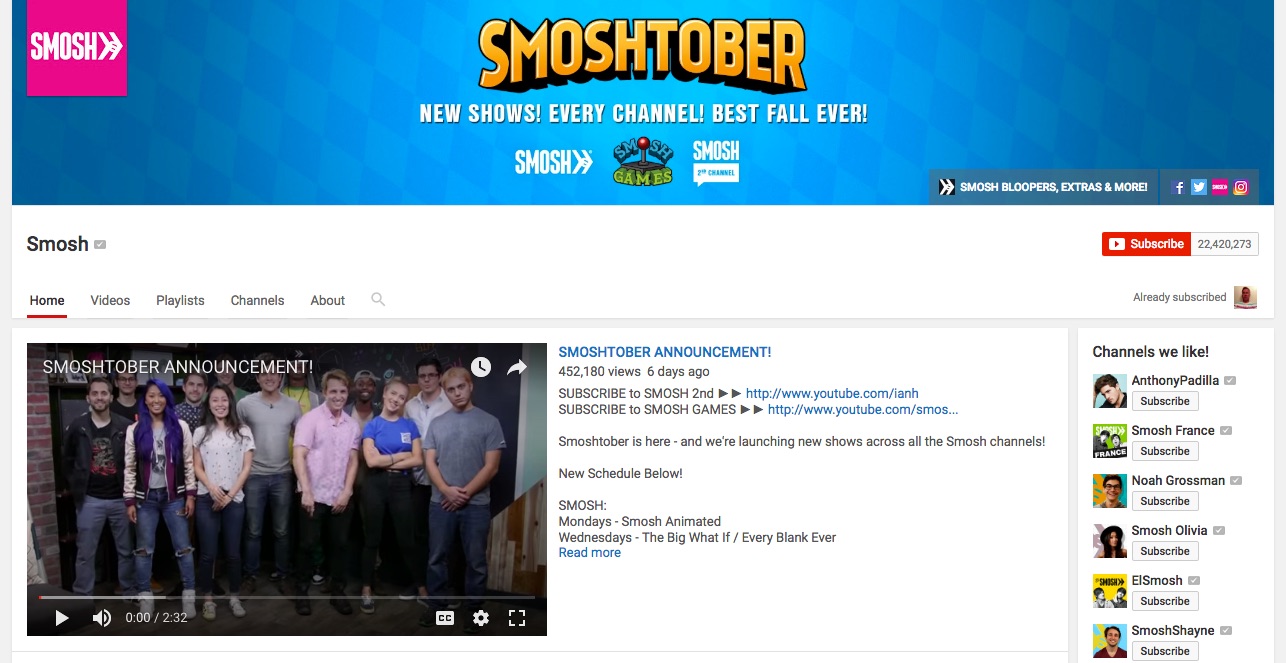 7. One Direction Vevo– This channel features the official music of One Direction, a modern boy band featuring four guys who seem to enjoy singing about situations that are human and emotional. One of their featured videos currently on the site is called “History,” and features images and video of travel that the group did together.

The group even engaged in a “group hug” at the end of the video, which further emphasizes the emotional component which fans seem to love.

They love it to the tune of 20 million subscribers. 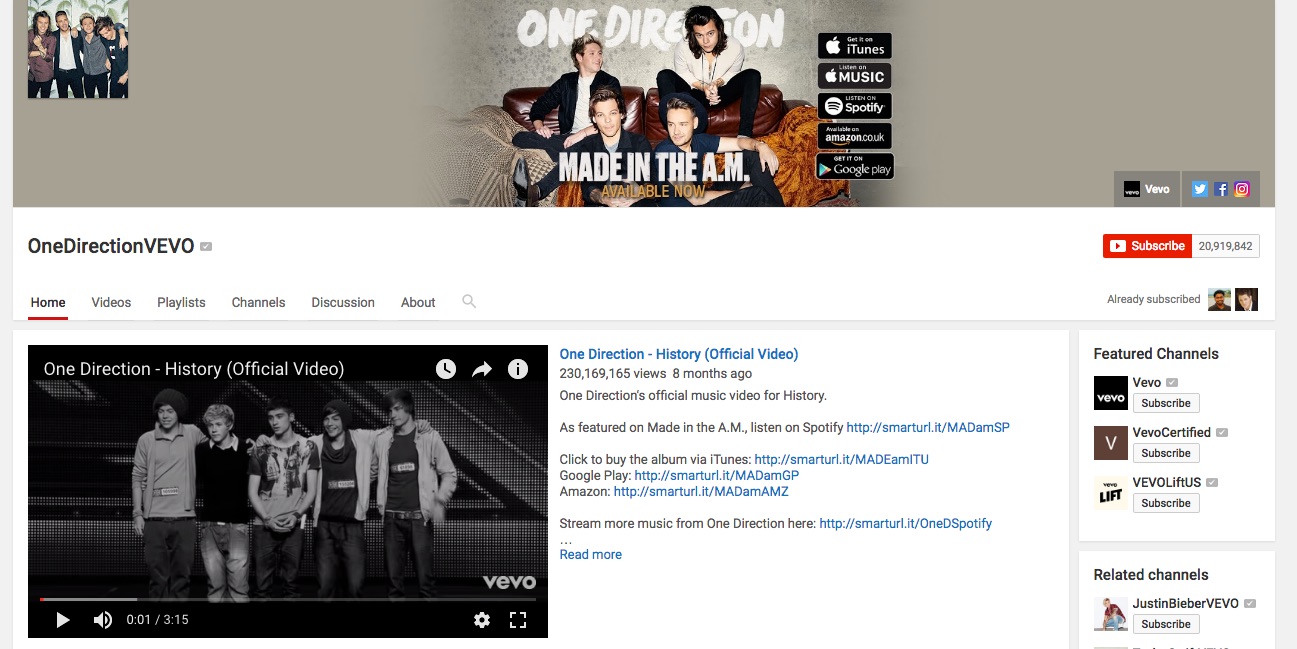 8. Taylor Swift Vevo– Taylor Swift comes in next with her official music channel with 20 million subscribers and over 47 million views. One of her latest songs, “The New Romantics,” is timely because of all of the protests going on lately from anti-American groups who wish to make a statement that they do not appreciate their freedoms.

Swift packs a powerful punch when she sings, “every day is like a bad joke..it’s our National Anthem and we sing it proudly…the best things in life are free.”

The song, though delivered with a modern sexy swing, seems to be an attempt to bring back the good things of life and the audiences seem to love it. 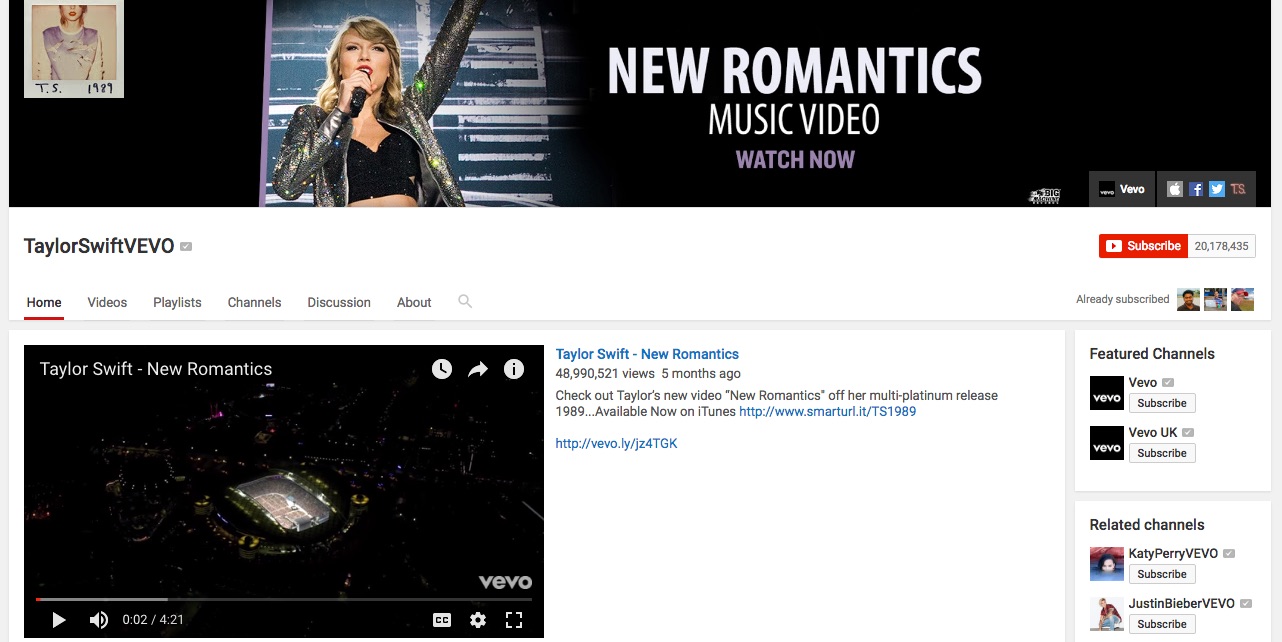 9. Katy Perry Vevo– The ninth most popular channel (by number of subscribers) is Katy Perry’s official music channel. Her latest song, “Rise,” features a dramatic video of a woman who is trapped by ropes and a parachute that we assume she has landed with and she seems to be suffocating or drowning but rises in the end to survive.

Dramatic music video apparently sells. This one comes in at 19 million subscribers.

10. Vanoss Gaming– This channel is all about gaming. It focuses on strategies on video games and how to get through the various levels. The one we watched was about Gameboy PedoBoy. It takes a rather childish approach and often features off-color humor. But it has received over 18 million subscribers. 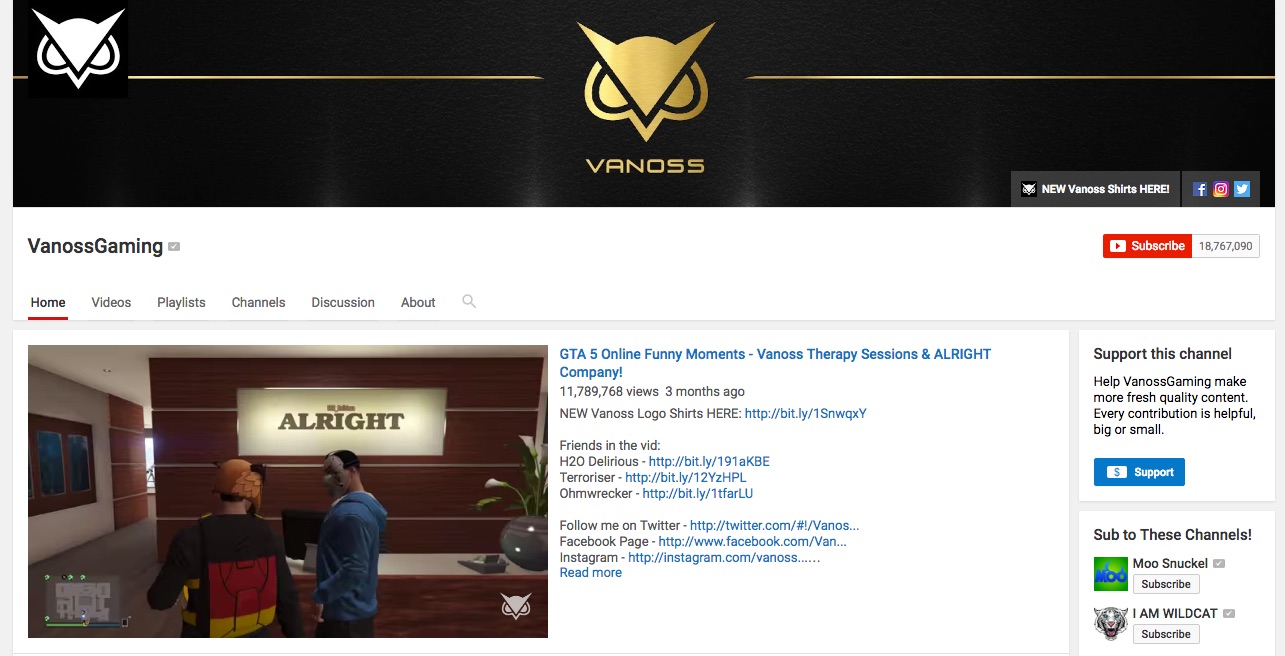 Analyzing the most viewed youtube channels by subscribers was an interesting (and somewhat educational experience.)  The most popular channels were almost 100% about entertainment and were either music-related or comedy-related. Video gaming was highly popular as well and there were several channels that focused on music and entertainment.

The wild popularity of such channels as Taylor Swift’s music channel and the others than focus on popular music and video games is likely indicative of the need for people to have some sort of escapism in their entertainment and seem to flock to the channels that offer them that.

With so many people using online video to get their message to the masses, this gives us insight as to how people are choosing what they subscribe to on YouTube and can help fine-tune what you do with your own videos.

One word in parting: don’t try to be a video gamer channel. While it’s true that some of the most popular channels are about entertainment, remember that many of these were put up my junior high students who wanted to get a laugh. As a business, you are trying to build a brand.

So despite the temptation to try to create something that goes viral or gets millions of subscribers, remember you don’t have to achieve that kind of fame to be highly successful in business.

It is far more important that you build a brand and a YouTube channel that is professional, dignified, and sustainable that your target audience will engage with and share. It doesn’t matter if you get the mainstream viewers, as long as you get the people that will buy from you and keep coming back.

To help you focus your efforts in the right way with your video, see the professionals at AnimatedVideo.com. We can help you create animated videos that have longevity, durability, and purpose.